There’s something magical about a rooftop bar. A cool breeze, sunshine and miles of pretty views are enough to make anyone feel carefree. Whether you’re looking to catch the sunset with a drink in your hand or just want to slurp down oysters with a view of the skyline, we’re sharing a few of the city’s best rooftops. 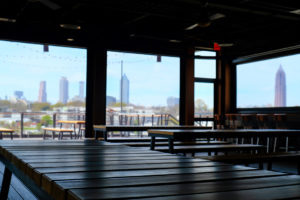 The massive, 20,000-square-foot brewery opened alongside the Eastside trail of the BeltLine in January. Conceived by Bob Powers, Carey Falcone and Mitch Steele, the brewery serves up to eight draft beers at a time, with seasonal variations rotated in throughout the year. Standouts among the permanent collection include the Kikimora, an IPA with peachy, floral notes, and the Euphonia, a refreshing pilsner. A large indoor dining area overlooks the brewing facility, but its partially covered rooftop (bonus points on those rainy days) is a thing of beauty. The view looks over the BeltLine and west toward the skyline. Belly up to the bar or a communal table and order some of Executive Chef Julio Delgado’s creative bar grub, such as blistered shishito peppers with ginger aioli, and beer can chicken. Save room for the campfire s’mores dessert, a delectable chocolate mousse with graham crackers and hazelnut croquant (brittle).

Following a five-year renovation, the historic Hotel Clermont in Poncey- Highland opened its doors in June. Thanks to the hotel’s proximity to the Midtown skyline, revelers feel as though they’re on top of it. The rooftop is reminiscent of a garden party. Wrought iron tables sit atop AstroTurf, with lounge chairs and lawn games scattered about. Grab a drink from the rum-centric bar (try the Hawaii Five-Oh with coconut rum, orange, lime, pineapple and mezcal) and stay until nightfall when the hotel’s iconic neon radio tower lights up.

Six Feet Under has locations in Grant Park and West Midtown, and both boast rooftop bars. West Midtown’s overlooks the city from the west, while the Grant Park rooftop affords a view of Oakland Cemetery. Grab a seat along the railing and order up oysters on the half shell and a cold beer. If bivalves aren’t your thing, try the catfish fingers or the spicy rat toes, a house specialty of baked jalapeños stuffed with shrimp and wrapped in bacon. 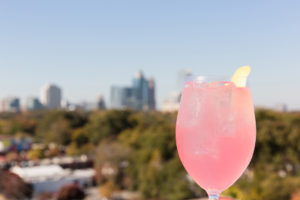 9 Mile Station bills itself as a beer garden, but the cocktails are worth trying, too.

Two fun destinations sit on the rooftop of Ponce City Market: Skyline Park and 9 Mile Station. Skyline Park has an old-timey atmosphere with carnival games (you can win prizes!), mini golf, a slide and rides. A concession stand serves nonalcoholic and adult beverages. If you’re hungry, make a reservation for 9 Mile Station and quell those pangs with one of the creative dishes. Standouts include the sausage trio board with a merguez corn dog, beer-poached bratwurst, kielbasa, pickles and harissa mustard; and the ham and cheese galette with tomato basil soup. The Station bills itself as a beer garden, and while the list is flush with local and domestic selections, the cocktails are excellent, too. The Treat Yo Self with gin, lime, elderflower, bitter bianco, pineapple and aloe is particularly transportive.