Jess Hunt-Ralston, a communications officer at Georgia Tech and the creative force behind the lifestyle blog Where With Elle, had been dating her now-husband, Chad, for less than a year when they decided to buy a house together in 2012. She was in her last year studying at Tech, and he was finishing law school at Emory. They scoured the city for the right house until landing in a cozy two-bedroom, two-bathroom bungalow in Poncey-Highland. 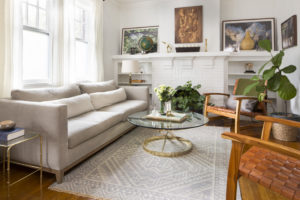 Then, the neighborhood named after the intersection of Ponce de Leon and North Highland avenues wasn’t known as the vibrant pocket that it is now. “I gotta give it to Jess; she did a lot of research,” says Chad. “Ponce City Market was still-shuttered City Hall East, and the BeltLine was a dirt path behind Two Urban Licks. We walked it one day, and it was pretty overgrown. There was a lot of vision there.” Her neighborhood foresight paid off, though, and now they’re a quick walk from bustling PCM with the luxury of living off a quiet street. There’s also a cool historical feature, Jess explains: “We think most, if not all, of the houses on this street are Sears Roebuck kit houses. You could get your mortgage and all of your construction materials from Sears. Everything would be delivered by rail to what’s now PCM, and home builders would pick it up. It’s interesting to see how everyone on our street has taken their house and made it their own.” 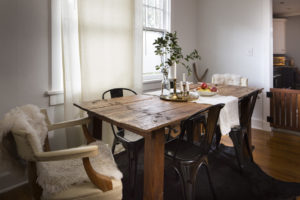 You never know where you’ll find inspiration during a reno. Jess found an old barn door and converted it into a dining room table.

Despite having a knack for design, a home renovation was never the couple’s dream. In fact, after a string of inauspicious home viewings, Jess wasn’t sure she had a home reno in her. But after moving into their home, which was built in 1935, it was apparent that changes needed to be made. They eased into it with small projects, such as removing the popcorn ceilings and tackling the garden. They consulted with a contractor for two years when they decided to do a renovation, but when they were ready to take the plunge in 2016, he had moved on to bigger projects. He did refer them to their current architect, Cody Patton of Patton Architects, and contractors, Keith Jones of HRI Group and Tim Allen of Tim Allen Homes, whom they worked with for the entirety of the project. 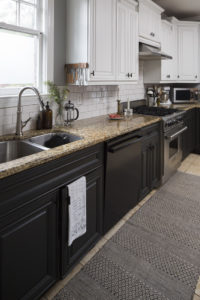 Jess’s and Chad’s kitchen originally had cherry stained cabinets and yellow walls; after revamping the look, they were able to free up space by moving the fridge into the pantry.

What was once the west-facing front porch transformed into a bright sun room that also serves as the new entryway. The otherwise neutral room gets a pop of color from a bright orange director’s chair, a relic from Jess’s mother, a former teacher. The old front door still has its doorbell; instead of removing it, they added a brass placard that invites visitors to “ring once for Champagne, twice for whiskey.” (Do it, and you’ll be treated to a chorus of barks from their dogs, Kipper and Pimm’s Cup.) The sunroom flows into the study on one end and the living room on the other.

Renovations continued with refitting the original single bathroom and adding on a master suite. To say that the original bath was cozy would be an understatement. “We liked to say you could be on the toilet, brush your teeth and spit into the bathtub,” Jess laughs. The new space is a work of art with a cast-iron, double slipper bathtub in the glass-enclosed shower, with plenty of room left over in the shower itself. The tiles, which look like wood, are laid out in a herringbone pattern. Jess says they asked themselves, “How do we bridge the 80-year-old pine wood floors to this modern space?” Wood tiles answered the question.

Jess has a minimalistic sense of style, defining her MO as “less is more.” She also aspired to a “modern farmhouse” feel to balance the minimal aesthetic. Throughout, the house’s decor is infused with heirlooms and brass and wood accents. The blend of modern and cozy shines in the home’s living room, where a gallery wall displays pictures from their travels. They hang above a vintage record player that was passed down from her grandparents and serves as a reminder of the times it spun Johnny Cash tunes while she danced along. 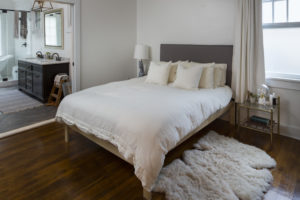 Jess’s “less is more” aesthetic applies to the master bedroom, which is clean and crisp.

The personal touches continue in the dining room, where whiskey— a shared passion between the duo—is given prominence on an impressive hutch. Chad works with ASW Distillery, a local whiskey producer, and is a longtime enthusiast of the spirit. (The couple honeymooned on the Isle of Islay in Scotland, where the country’s heavily peated whiskies are produced.) The hutch also holds 52 bottles of wine. “It’s not overwhelming, but it’s a nice background item and tells a story about [us],” says Chad.

Throughout the renovation, the Ralstons kept sustainability in mind. Bricks from demolished walls in the house were recycled into the garden’s pathways. Windows and doors were placed on the neighborhood website Nextdoor, giving neighbors the chance to snag them. What used to be their bedroom window is now in a neighbor’s greenhouse. Instead of furniture from standard home stores, most of their pieces were purchased secondhand. “I read something that said, ‘Look around you; everything you see is future trash,’ and so thinking with that mindset, if you can find a sofa or table at an antique store or on Craigslist, [you can reduce] the energy that goes into it and expand the lifespan of the item,” says Jess. They found pieces in some expected spots, such as Chamblee’s Antique Row, and some not-so-expected places in Habersham County, where they happened upon an abandoned barn door. Thanks to a Pinterest tutorial and Jess’s DIY prowess it’s now their dining room table and adds a rustic flair to the room. 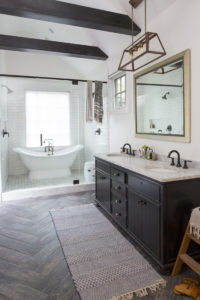 The master bathroom was added on, with the bathtub in the shower to create more space.

Fixing up a house wasn’t their original intention, but Chad and Jess embraced it. Jess thinks she could flip houses, but could she part with theirs? “Someone asked me if we’re selling our house, and just the sheer idea of putting so much into this, and so much love, and getting things the way we wanted, I was like, ‘What do you mean? I would never even think about it!’”