Gwinnett County is home to one of Atlanta’s great, yet lesser-visited, multicultural neighborhoods

Often overshadowed by Buford Highway, Atlanta’s well-known international culinary corridor, Duluth is home to the city’s version of Koreatown and is well worth exploring in its own right. The towns of Gwinnett County, including Duluth and Lilburn, have dozens of Korean restaurants, as well as unique cultural offerings, including one of the country’s largest Hindu temples. Here’s how to while away a day (or two) in this internationally inspired area. 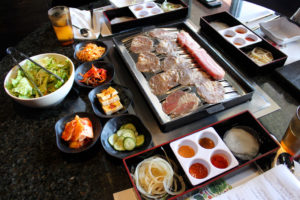 A Korean barbecue feast at The Stone Grill in Duluth

The best way to experience the area’s Korean eateries is by joining Explore Gwinnett’s Seoul of the South tour on May 12 (the visitors’ bureau runs the tours quarterly). It visits a number of locations and includes food, transportation and an expert guide.

While you’re in Duluth, spend a few hours relaxing at Jeju Sauna and Spa (see our November/December 2017 issue), a traditional Korean spa with steam rooms, hot pools and saunas. Entry price to Jeju lasts for 24 hours, so you can stay as long as you like.

Over in Lilburn, you can take a tour of the impressive BAPS Siri Swaminarayan Mandir, formerly the largest Hindu temple in America. Built over the course of 17 months in 2007, the temple is decorated with 34,000 hand-carved pieces of Turkish limestone, Italian marble and Indian pink sandstone. The temple offers self-guided tours, and certain daily ceremonies are open to the public.

Test your singing chops at Gang Nam Karaoke, one of the top-rated karaoke bars in Gwinnett County. Named for a district of Seoul popularized by Korean artist Psy’s hit song, “Gangnam Style,” this spot has spacious private rooms and a selection of cocktails and bites like the ones you might find in the Korean city. It’s located off Pleasant Hill Road near plenty of restaurants for a pre-karaoke feast.

Tastes of the world 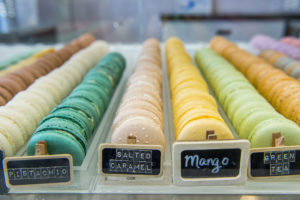 Speaking of a feast, the communities of Gwinnett have a type of food for just about every taste. Pleasant Hill Road and Jimmy Carter Boulevard, in particular, are full of locally owned restaurants for adventurous eaters.

Ask someone what they know about Korean food and they’ll likely mention Korean barbecue, a meal made of meats and vegetables cooked over a shared grill. There are plenty in Duluth, including The Stone Grill, which is new-school with friendly servers and K-Pop videos playing on the televisions. In addition to meat options such as steak and pork belly, be sure to try the egg soufflé. You’ll see why it’s been praised by everyone from the Travel Channel to the Korean Food Foundation, an organization that was established in 2010 as a means of increasing awareness of Korean food worldwide.

East Pearl Seafood in Duluth is a Chinese restaurant known for its tanks of live sea creatures just waiting to make it to your plate. Dim sum is the main draw, and the restaurant’s soup dumplings, or xiao long bao, can’t be missed.

Indulge your sweet tooth with the Instagram-famous macarons from Duluth’s Mac Lab Bakery & Cafe. The most famous of their macarons are designed to look like unicorns, complete with rainbow horns. The confections have been featured by the Food Network, Refinery 29 and NPR, and they taste like Fruity Pebbles. The pastry chefs make this style in limited quanities, but other flavors, including matcha, passion fruit and salted caramel, are also available.

Jeju Spa and BAPS Siri Swaminarayan Mandir also each have their own restaurants, should you feel peckish during your days there. Jeju’s food court serves grilled pork, spicy rice cakes and other Korean fare, while BAPS offers authentic vegetarian Indian fare.

One of the best places to stay in Duluth may be the Sonesta Gwinnett Place on Gwinnett Place Drive, which houses more than 100 full-service and extended-stay suites. Rooms have coffee makers and flat-screen televisions, while the extended-stay section has kitchenettes and is pet-friendly. In-house restaurant ArtBar serves up bites such as brisket tacos, as well as craft cocktails. Grab breakfast at The Grapevine before swimming a few laps in the indoor and outdoor pools.

Seoul of the South Tour
exploregwinnett.org/seoulofthesouth